Home » Book » Wherever I Wind Up: My Quest for Truth, Authenticity, and the Perfect Knuckleball

Wherever I Wind Up: My Quest for Truth, Authenticity, and the Perfect Knuckleball 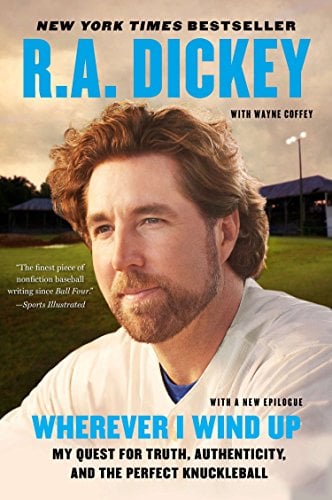 With a new epilogue by author R.A. Dickey, winner of the 2012 Cy Young award

In 1996, R.A. Dickey was the Texas Rangers’ much-heralded No. 1 draft choice. Then, a routine physical revealed that his right elbow was missing its ulnar collateral ligament, and his lifelong dream—along with his $810,000 signing bonus—was ripped away. Yet, despite twice being consigned to baseball’s scrap heap, Dickey battled back. Sustained by his Christian faith, the love of his wife and children, and a relentless quest for self-awareness, Dickey is now the starting pitcher for the Toronoto Blue Jays (he was previously a star pitcher for the New York Mets) and one of the National League’s premier players, as well as the winner of the 2012 Cy Young award.

In Wherever I Wind Up, Dickey eloquently shares his quintessentially American tale of overcoming extraordinary odds to achieve a game, a career, and a life unlike any other.